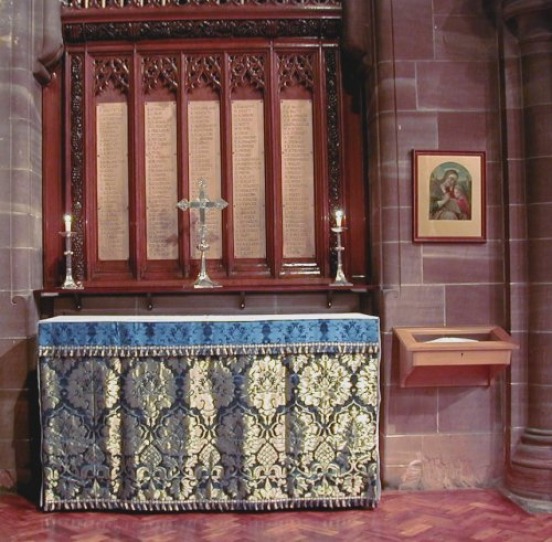 St Paul's church is the sister site to St Anne's Stanley. You can view the St Paul's memorial by using the following link

August 4th 1914 Britain declares war on Germany, and for the next four years the Great War will continue. A horrific episode in the worlds history that will claim the lives of millions of people, maim and injure thousands more, and deprive families of their loved ones. Prime minister David Lloyd George had promised the enlisting men that they would return to "A land fit for heroes "  What most of the returning men came home to was a small cash payment, a civilian suit, and a pair of medals. They then had to join the masses looking for work, often their search was in vain. Injured men recieved a small pension, yet had no chance of employment. These men had fought bravely for king and country, now they returned home to unimaginable hardships. Their biggest fight had started, the fight for themselves and their families to survive.
' When you go home, tell them of us, and say,
for your tomorrow, we gave our today. '

At the outbreak of war the men from the parish of St Anne's took the call to enlist. Many joined the Liverpool King's regiment or other regiments of their choice, often opting for regiments close to their family roots such as Irish, Scottish or Welsh. Some served at sea as Mercantile Marines or with the Royal Navy. They would all face dangerous times in foreign lands and waters, witness terrible events, and fight in some of the bloodiest ever known. Inevitably some would never return home, paying the ultimate sacrifice with their lives. It was in honour and memory of these brave men that a fitting memorial was erected at the church. Paid for by the Merchant and Ship Owner Thomas Fenwick Harrison of the T. & J. Harrison Line, who was also a member of the parish. In 1914 Mr Fenwick Harrison presented an organ, as a memorial to the patriotism of those who voluntarily offered themselves for service in the Great War. Later the memorial screen was erected, on which are entered the names of those who died during the conflict. 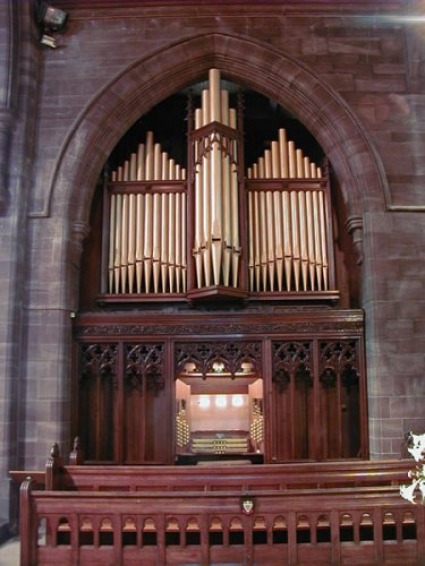 The War Memorial Organ is situated in its own chamber located on the north side of the chancel.

The organ at St. Anne's was built during the first world war by Messrs. Rushworth and Dreaper of Liverpool. The opening recital was given by Alfred J Eyre Esq, F.R.C.O, M.R.A.M. Organist at St. John the Evangelist, Norwood, London, formerly organist of the Crystal Palace, London.

St. Anne’s church was consecrated in 1890 and was built by the generous benefactor Thomas Fenwick Harrison. He also provided a memorial and organ in memory of those who gave their lives in the great war to honour the ultimate sacrifice that they made. At the remembrance service each year the choir sings the words written by Laurence Binyon “They shall grow not old, as we that are left grow old: Age shall not weary them, nor the years condemn. At the going down of the sun and in the morning, We will remember them.”

The memorial is there to remind us every day of the year that these men laid down their lives for their country and to remind us of the atrocity and scale of the human sacrifice. From St. Anne’s parish alone there are 175 names listed on the memorial. We can barely imagine the pain and suffering that they and their families endured so it is fitting that their memory is honoured in this website.

We will remember them.

Please use the links at the top of this page to read details about the men listed on the memorial and in the churchyard. You will also find details about the church. Where possible I have added details concerning the men, these include census and service records. Due to WW2 bombing only a small fraction of these service records remain so unfortunately not all of the men listed at St Anne's church are included. Sadly due to lack of records I have been unable to find any details about some of them, but their names are entered and the research will be ongoing. I welcome any input and hope that along the way relatives of these brave men, and anybody with an interest will find this website of use. I wanted to remember the men and show that they all had lives to live just like you and me, I hope that I have done them the credit that they deserve. After all they are much more than just names on a war memorial.

Please feel free to view or sign the guestbook by following this link            http://www.a-free-guestbook.com/gb/stannesmem/

I would like to thank Geoffrey Williams and Emma Calderwood at the church for their help with this project.

Thanks go to Pierre Vandervelden for allowing cemetery photographs to be used from his ' In Memory ' Website. And to WW1 Cemeteries for allowing the use of their photographs.
Visitors
Thank You